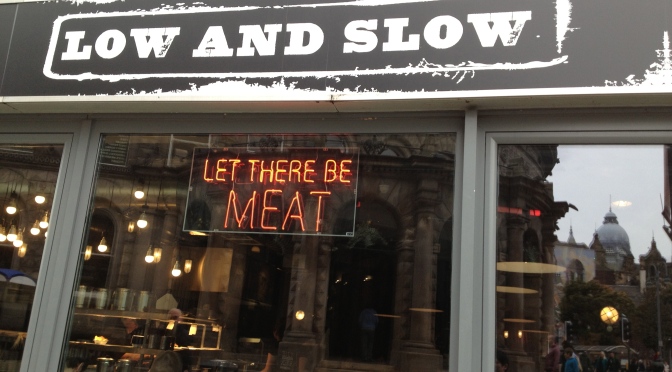 Reds True Barbecue opened at the top of Call Lane in Leeds city centre in September 2012 and has been busy ever since. I’d been 3 times before but had never written a review on it, so thought a visit with meat loving friends could also coincide with a little blog on the side. 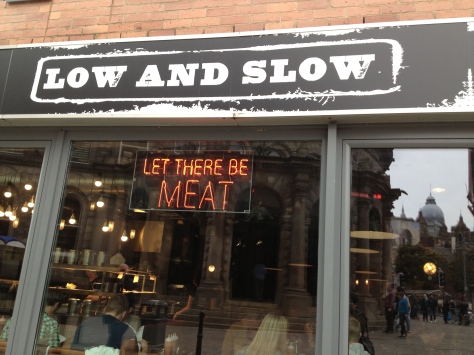 We’d already built up the reputation of the place to our eating companions and so there was a certain level of anticipation. They have a first come first serve policy on the weekends, so from previous experience had a feeling it would be very busy when we arrived. It was, the man on the door said the next free table would be available at 8:30pm, at the time it was 6pm so we put our name on the list and went for drinks while waiting for the call.

For those of you who haven’t eaten at Reds, the restaurant work with the philosophy of ‘Low ‘n slow BBQ’, cooking at low temperatures over many hours producing tender, melt in the mouth cuts of meat, e.g. beef brisket, pork ribs and shoulder. With an open plan kitchen you can see food into their Oklahoma smokers (which are on virtually all the time unless being cleaned) and the food being prepared. The team at Reds have done extensive homework on this style of cooking food, having travelled around parts of the United States, e.g. Memphis and South Carolina researching all matters BBQ, such as different meat rubs, sauces, cuts of meat and cooking equipment.

We decided to share little plates of homestyle nachos, cracklings, jalapeños poppers, rib tips and house made beef jerky. After being informed that the rib tips and beef jerky had run out we chose the BBQ rib taster and jumbo BBQ wings instead. For the main course we decided on Pulled Meat Nachos, Texas Beef Brisket, Combo 4 – Texas Beef Brisket and Pulled Pork and Pulled Pork Sandwich.

Our starters arrived a few minutes later. Everything looked fantastic and the smell alone just made you want to wolf the whole lot down really quickly, but knowing that my main course was large I had to air on the side of caution.

The nachos are great, the warm tortillas crisp are really tasty on their own, the accompaniments are a match made in heaven with great, thick guacamole, with enough chilli to give it a real kick but a good dollop of sour cream to have just enough of a cooling effect. It would have been nice if the cheese was melted on the top to give it a lovely stringy texture, but apart from that it couldn’t be faulted. The cracklings are always yummy and didn’t disappoint, lovely a crisp with the pork fat cooked to perfection. They should be bagged up and sold everywhere they are so good. The ribs were tender, not too smokey which was good for me and the meat came off the bone so easily. Jalapeño poppers were great, lovely and crispy, with melted cheese inside and a gentle kick of the Jalapeño made them a real winner in my eyes. Last but not least – the Jumbo BBQ wings were tender and juicy and coated in their fantastic BBQ sauce.

Our main courses arrived not long after our starters were cleared.

Once again the food smelled amazing and I could not believe the size of my pulled pork sandwich, it was huge! I wasn’t sure how to tackle it so I picked it up and bit into what was really yummy, the pulled pork tasted fantastic and the slaw works well with the meat, cutting through the richness. The bread bun is so soft and very tasty. The fries were crisp and the BBQ smoked beans really deep in flavour making it a good accompaniment to the sandwich. My fellow diners also enjoyed tucking into their dishes too, I was told the beef brisket was lovely and soft and had a deep meaty flavour. The BBQ gravy was very tasty, that and the slaw working well with the brisket. One of the condiments added was their North Carolina BBQ sauce (a vinegar based pepper sauce), which added another layer of flavour to the whole meal. The pulled meat nachos is something that I have tried to tackle before and knowing from experience it is a very satisfying eat, the nachos warm and crisp, the guacamole, sour cream, chilli con queso and unholy BBQ sauce in plentiful supply adding tonnes of flavour and the jalapeño peppers adding the extra kick, bringing the whole dish alive. Finally the Combo 4 – the beef brisket cooked to perfection and the pulled meat lovely and soft, topped with crispy crackling and gherkins. The chosen side of mac-n-cheese working well with its Jack cheese sauce. All in all a winner of a dish.

In terms of service and atmosphere, their staff are knowledgable on the food, quite happy to recommend dishes and obviously show passion for the philosophy of the restaurant. The atmosphere is always good with music of the American south playing in the background.

Our total bill for 4 people was £99.85, not including tips. Definitely worth the wait and value for money. We walked out of there completely satisfied and very full!!