I met up with a couple of old friends in York this week and for lunch we tried out popular restaurant Rustique, located on Castlegate near the Jorvik Centre. York is a popular city with locals and tourists alike and has a number of fine dining establishments, such as Melton’s restaurant and The Blue Bicycle, but it also has its fair share of chain restaurants too. This means independents need to work increasingly harder to stay open, e.g. just a number of weeks ago, J. Baker’s Bistro Moderne, arguably one of York’s finest restaurants closed down unexpectedly.

As their name suggests they serve rustic French food, in a bistro setting. The restaurant has a pleasant dining room, with walls covered with French prints from artists such as Toulouse Lautrec. 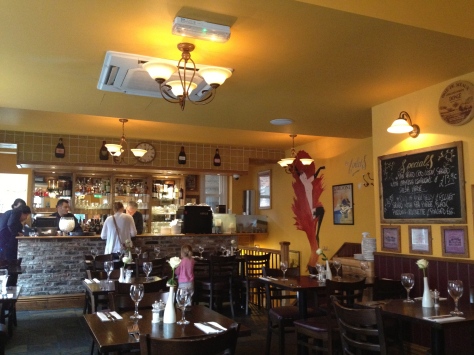 They offer an extensive ala carte menu, but also a very reasonably priced set menu of 2 courses for £12.95 or 3 courses for £14.95. It was good to see there was plenty of choice available for each course on the set menu too, including French classics steak frites and moules marinière.

We ordered a bottle of the house white and some sparkling water, which was brought over promptly. Our starters were brought out and we were all pretty pleased with what we saw: they all looked good and we tucked in immediately. I chose the Basque egg and it was a very tasty starter, even though the component parts were all put together in the same dish, they all still had their own individual flavours and were cooked very well. I really liked the mix of the different sausages with the potatoes, and the paprika with the oil from the chorizo gave it a lovely flavour. It looked like a small tapas-sized dish, but it was a sizeable portion to start off with.  I was reliably informed that the crab cake was crispy on the outside, soft and nicely ‘crabby’ on the inside. Very tasty. The pâté starter seemed to go down well too, to the point that my friend, who had quickly wolfed down her crab cake was then sampling some of the pate and onion marmalade!

After a good start, it didn’t take long for our main course to be brought out.

For me it was a toss up between the classics moules mariniere and the steak frites, but I was hankering for a decent steak, so steak frites was the winner this time. It had been really well cooked, medium rare as I’d requested and had a nice garlic butter sauce. The frites were thin and crisp and the portion size was not scrimped on either. The only thing I had a slight issue with, and it is a very picky thing, is I would have preferred pouring the garlic butter sauce myself, rather than having it already done. A nice little jug of the stuff would have done the trick, allowing me to control how much I wanted. Nevertheless, it was a pretty tasty dish and I was wholly satisfied and full at the end of the course. My dining companions also thought highly of their main courses, the goat’s cheese tart new potatoes and a well dressed salad was found to be yummy, its portion size was generous. The duck confit had a crispy skin, succulent meat with good dauphinois potatoes, and a lovely redcurrant sauce finishing it off nicely. When our waiter asked if we wanted any desserts, we all looked at each other and were resigned to the fact that we were all too full!

The staff were welcoming and efficient, our food was cooked well overall. The location of the restaurant is good as it’s in the city centre, but not on the more populated streets and a little out of the way. The total cost of the meal with wine was £58.20 for 3 people, so very reasonable and good value for money. Rustique has become so busy that they are opening another restaurant in Lendal next month, so if your in York it would be worth giving them a go.