Chef Greg Lewis from the Award-winning Hummingbird Kitchen is back with a pop-up menu in Jake’s Bar & Still on Call Lane, Leeds. It’s been a long time since I’ve been to Jake’s Bar, so long ago, it was still called Jake’s Bar & Grill!! I couldn’t really remember when the last time I had been to Jake’s for a drink, maybe 5 or 6 years at least! I’d read they’d had a re-furb at the beginning of the year and I really liked to look of it, it certainly wasn’t how I remembered.

After the success of a pop up venture at Seven Dials for London Cocktail Week, Greg Lewis is back to show us Leeds folk what he’s got to offer.  From a quick peak at the menu it looked like they were trying to showcase lesser used and more unusual cuts of meat with a twist, hence the name Tongue ‘n’ Cheek. 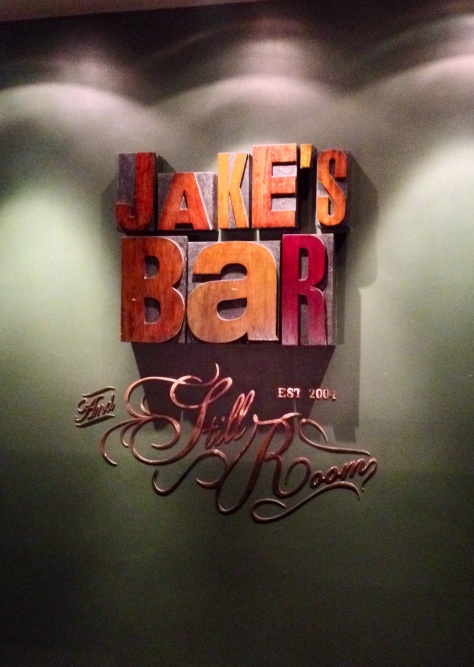 I had an introductory voucher for 50% of food and popped in for  a nosey with a mate on Thursday; their launch night. While ordering drinks from the bar we gave the menu a quick once over. It was full of interesting sounding dishes divided into ‘Peckish?’  –  starters and snacks, to ‘Burgers and Subs’ like English veal burgers and North Yorkshire mutton burger and ‘Hank Marvin’ – big plates, such as Surf & Turf and Smoked Beef Short Rib.

After consulting with the waitress about portion sizes we decided to choose a selection of starters and a side of chips. Initially my friend had eyed up the Surf ‘n’ Turf, but unfortunately the waitress was the bearer of bad news and informed us they had none left! My friend was gutted and a little flummoxed, as she’d put all her eggs in one basket so to speak and then had to have a re-think. Oh yes, I know I bet you’re thinking that’s such a hardship, but she was momentarily  a tad deflated. After gathering our thoughts we decided on cod cheeks, pork kebab, chef’s special crab and sweet and sour chicken with a side of chips.

The staff were friendly and enthusiastic, maybe a little too much at times, but on their first evening I’m sure they wanted to make a good impression, which on the whole they did.

We happily chatted away with music in the background, the right volume so you could have a conversation. The room in general is dimly lit but I did like that above each table there was focused lighting so you didn’t feel like you were just in a bar with dining tables there as an extra.

First up were the cod cheeks, served in a little metal basket, a bit of a gimmick, but it looked cute I suppose. It was accompanied by a small bowl of curry sauce and a few scraps scattered on the plate. The cod cheeks were delicious, the cheek is the perfect size for these bite-sized morsels, with meat that’s full of flavour and a gin batter that was as light and crisp as you’d want.  We liked the chip chop curry, it had good flavour and had lots of sweated down onion, spices and sultanas in it, I personally would’ve liked a pile more scraps (and lot for cod cheeks too), but it was a snack that was loved from the first bite. 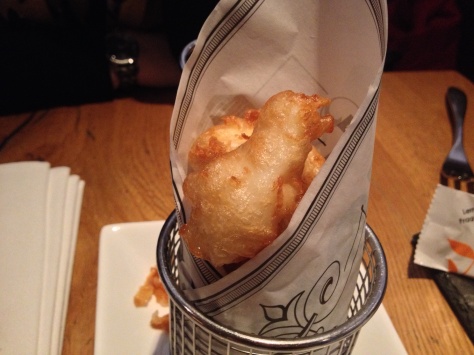 Next up – sweet ‘n’ sour chicken in a bag.   Our lady had told us the idea of this snack was flavouring your own chicken with a mixture of seeds and a sweet and sour glaze, which we poured into the bag containing the chicken. After giving it a good shake Bob’s your uncle you get sweet ‘n’ sour chicken!! It was as simple as that. Good interactive stuff,  but how did they taste?  The chicken was incredibly tender and moist, perfectly cooked. The mixture of seeds and the glaze gave a lovely sticky texture and flavour to the chicken. Very moreish!!

The 3am kebab was lovely, full of spices and I loved the hummus, I would have liked more flat bread to mop up the hummus though. Also as we were sharing, it would have been nice to have some side plates to use during the meal, as on a number of occasions I clumsily dropped bits of food.

Now originally we’d ordered the Chef’s special crab ‘sticky buns’, but unfortunately when our man brought them over he accidentally dropped them!! They were the last ones too, so close! My friend did say they looked great, so maybe next time? He quickly apologised profusely and offered us any other dishes which we wanted in its place as a consolation. Fantastic customer service I thought!!

They brought us a couple of other small dishes – Macaroni cheese and scampi. The mac ‘n’ cheese was yummy and cheesy, with mushroom and tarragon (I think). It was delicious.  While the scampi was nice, with a thin breadcrumbed crust; for me I didn’t enjoy them as much as the rest of the dishes.

Overall we had an enjoyable evening at Jake’s, the food on the whole was yummy. I’d love to make the most of the introductory 50% offer and try some of the larger dishes next time. It’s only available till the 2nd Dec from Pink Gorilla.

The total bill for food was just £10.20 (after the 50% discount), with one of the extra dishes being free of charge as an apology I think. An absolute bargain.

Food: interesting menu, plenty for carnivores, a bit limited for non-meat eaters.
Service: friendly, enthusiastic and quick.
Atmosphere: good atmosphere, may have been because it was the launch night but it had a good mix of diners and drinkers.
Jakes Bar
29 Call Lane
Leeds
LS1 7BT
0113 243 1110
http://www.jakesbar.co.uk