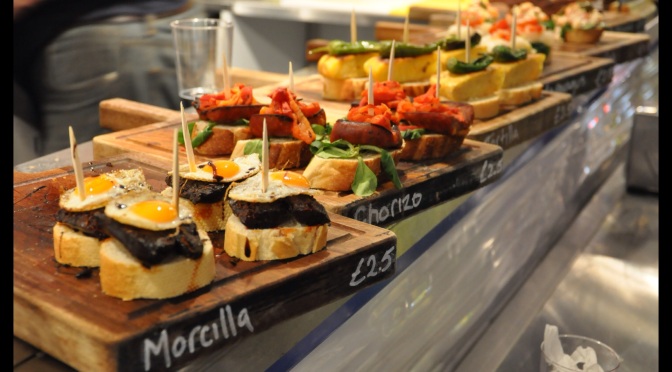 Ahhh for the love of good food!! Having been stuck indoors since Saturday and been hit by the dreaded flu, (that’ll teach me to miss the staff flu jab at work again), I’ve been desperately in dire need of proper sustenance.

Trinity Kitchen welcomed their newest five street food traders on Monday. Two of these, I’ve been following for a little while after reading they would be in the new line-up for Trinity Kitchen – Donostia Social Club and Original Fry Up Material. I must admit that it’s the different street food traders that really do it for me when it comes to Trinity Kitchen. Out of the seven permanent eateries I’ve tried Pho and Tortilla, I particularly enjoyed Pho, but to be honest even though I’m sure they have their fans, I’m not sure how fussed I am at trying most of the others, and I have my favourite go-to places in leeds for those already.

Out of the new traders I particularly wanted to try out Donostia Social Club as they serve Pintxos (pronounced pinchos), those Basque delights I fell in love with on a summer roadtrip around Northern Spain in 2010. It was a fantastic holiday, where we drove around the Basque region of Spain, working our way through Bilbao, San Sebastián and Logroño, amongst others. If you love good food, wine, culture, art and architecture old and new you may enjoy it as much as I did!

The region has influences from three areas each with their own climate and landscape, resulting in the availability of a range of different ingredients. It’s also one of the world’s culinary heavyweights famed for their gastronomy and the number of Michelin starred restaurants it possesses. The fantastic Rioja wine comes from the region, but also Pintxos. Traditionally pintxos are served on the bar counter – many are slices of baguette topped with different combinations of textures and flavours. Costing just a few euros each, normally the custom would be to order a drink and have a pintxos to accompany it, a fantastic way to have a leisurely snack, lunch or dinner. The streets of San Sebastián and Bilbao were lined with these Pintxos bars, and what was great was they usually had individual menus, so they didn’t compete with each other. I think back and feel if I’d been blogging then, I would have had an absolute field day!! We had a very memorable evening in Logrono on a pintxos crawl on the well known streets Calle Laurel and Calle San Juan, going from one bar to another and having drinks and pintxos in each. Our days went…explore, eat lunch, explore more whilst walking off our lunch in the warm sun, have a siesta and then late dinner.

Here are some of the tasty morsels we ate in Spain: 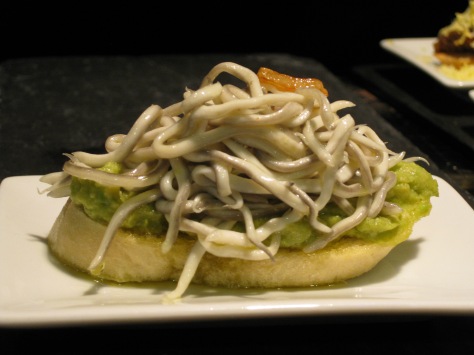 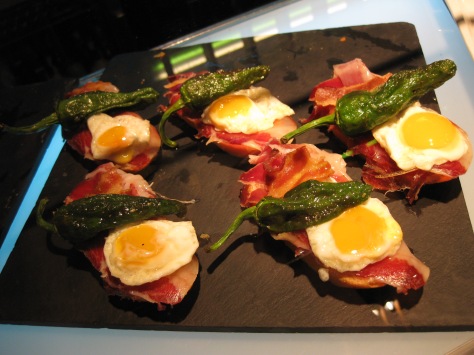 OK, enough of me reminiscing, it was fab though!

So, when I’d read that Donostia Social Club were going to be at Trinity Kitchen for a month, my heart skipped a beat. If I remember rightly Donostia means San Sebastián in Basque and it immediately reminds me of sitting in a pintxos bar with lots of regulars and many tourists!!

They have a selection of cold (£2.50) and hot pintos (£5) to choose from, as I’d expected the cold ones were lined up on the counter of their cool Citroen H Van to drool over; I certainly did and hot ones were cooked to order.

From what they had on offer I picked the scallops, tortilla, and morcilla with a lovely Rioja to wash it down. All were REALLY good, the scallops were MASSIVE, lovely and soft, perfectly cooked, on top of soft fresh bread too. A winner!!! My other two were cold pintxos and equally enjoyable, I LOVE tortilla, the best I ever had was on our travels in Spain with their warm, soft eggy centres, of which we ate many slices.  This wasn’t quite as good as those, but I did ask for seconds so that says a lot!! Finally the morcilla (black pudding) was YUMMY – meaty, but moist and I loved the quails egg on top.

For dessert I popped next door for a crepe from the ladies at Crêpe Lucette.

I love a classic crêpe with lemon and sugar, but they have a good choice of sweet and savoury crêpes too. It was freshly made, and took literally a couple of minutes. As thin as you would like a crepe to be, with the right level of sugary sweetness and lemony sourness. Filling too, my crêpe certainly wasn’t small. Very nice indeed!!!

The other street food stalls on my radar this month are Original Fry Up Material serving their British fry up and burgers.

Their signature dish is the English Brekkie Muffin, at the heart of the dish is their very own homemade sausages, free range Blythburgh pork shoulder, herbs and spices. Along with a free range egg, proper American cheese, dry cure streaky bacon, a ‘secret’ sauce  and their own English muffin. It sounds like a winner, I’m going to have to pop over when finishing my Christmas shopping to have one.

Finally Fish&, their name is already synonymous with great street food in Leeds and have built up a very loyal fan base. Having devised a new menu for their stint at Trinity Kitchen, I’m sure they will be selling their food to droves of people. Not only do they have their new menu, there’s the new VW van and a design upgrade too.

So far I’ve been really impressed by the street food traders at Trinity Kitchen, this month could be the best to date. Go and see what you think!!