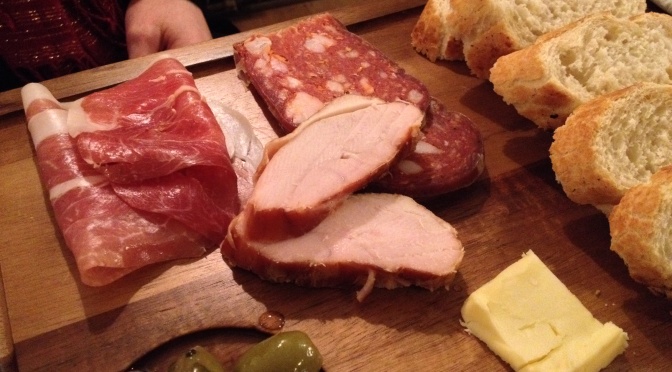 The day in the life of being a school teacher for me starts at 6:30am when I arrive at school. It normally ends into the early hours of the next morning doing school work, as well as blogging. So on Monday after parents evening my best mate and I were in need of a catch up and went for a drink at the Kirkstall Bridge Inn, somewhere I’ve wanted to go for quite a while since they opened last year. When I lived in Kirkstall many years ago I used to frequent the West End Pub, so never went to the Kirkstall Bridge Inn in it’s former guise The Old Bridge inn. After being closed for a lengthy period of time, at least 2 years the place was transformed, my friend said it was a dingy place in its former life, but now there was no sign of that whatsoever. It had been refurbished so it had a very open, but still a cosy, homely feel. With its walls emblazoned with traditional logo mirrors from breweries, little nooks and intimate places you could have a quiet drink. Upstairs it has an amazing fireplace with a mantlepiece that had a hint of the art deco period. I could see myself spending many an evening there, if I only I lived back in Kirkstall or didn’t have school work up to my eyeballs all the time!!

Big apologies for the very poor photos, on a rare occasion I only had my iPhone to hand, so I’m not particularly impressed by my efforts here!! I will endeavour to try harder next time. 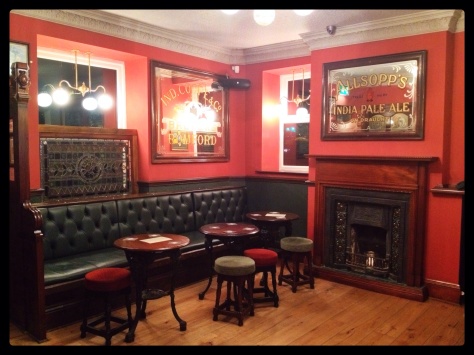 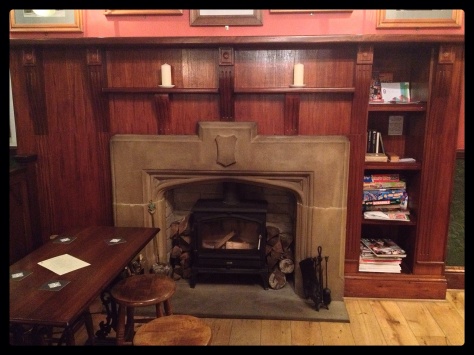 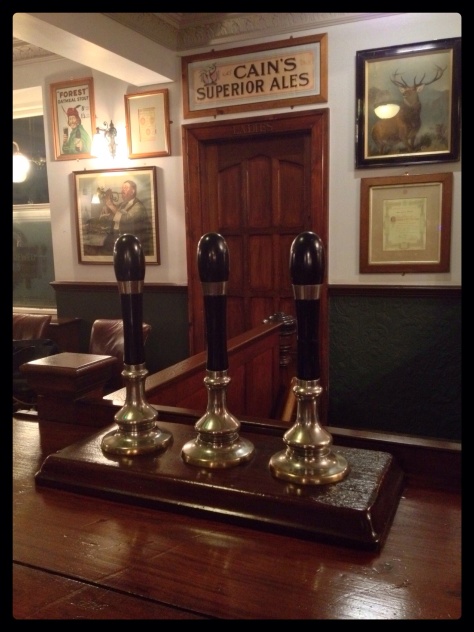 After getting stuck in the usual Kirkstall Road after work traffic, I was so pleased to see a glass of Merlot on the table when I arrived. Also, the news of £5 platters was like music to the ears, it was the right antidote to a long  day at work. 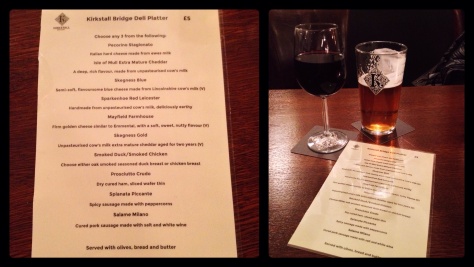 Ok, the bread and equally important the butter was soft, each of the meats were delicious in their own way. A pleasant surprise was the smoked chicken, my friend had initially wanted the smoked duck so when we found out they’d run out she opted for the next best thing, the smoked chicken. It was VERY good, thickly sliced and came with a smokiness that definitely had a presence, without overpowering the delicate meat. There was also a heat and spice on the platter where required, in particular in the form of the Spianata Piccante, advertised as a spicy sausage made with peppercorns. Oooh for me, it had a real lively kick, and was deliciously meaty! The Prosciutto Crudo, I love it when it is soooo soft it just tears without an ounce of effort and has that really  intense, concentrated taste to it…..this had all of those things! The Salame Milano was probably my least favourite of all the meats, through no fault of its own, just because it didn’t have the punchiness that the other three meats brought to the table. In it’s own right it was lovely though! I’m not the greatest fan of olives, yes don’t shoot me I’m just not, so my friend quite happily wolfed them down, evidence they were good then??

Stupidly, the only thing we could fault them on was not having a fork as well as a knife to use whilst eating the platter! 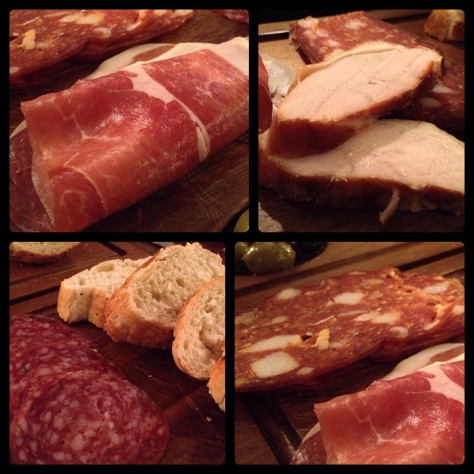 I also had some of their lovely Kirkstall Brewery Framboise, sorry no picture, I was so nice I completely forgot!! A definite must next time.

I really want to come back and write a proper review, as I was only there for a short time and to be honest, was still very much in teacher mode so I’m sure haven’t given it the justice it deserves! Even though, I know that if you are in the Kirkstall area, it’s definitely a place to have a lovely after work drink and a decent spot of yummy food!

Next time I want to sample their pop-ups with the likes of Bundobust and other street food sellers on their books, it really would be foolish of me not too! I’ve read they do a mean Sunday lunch too!!