Outlaws Yacht Club is a popular haunt in Leeds City Centre, which has very recently found fame from a mention in The Guardian’s article on the Top 10 Best Budget Eats in Leeds. 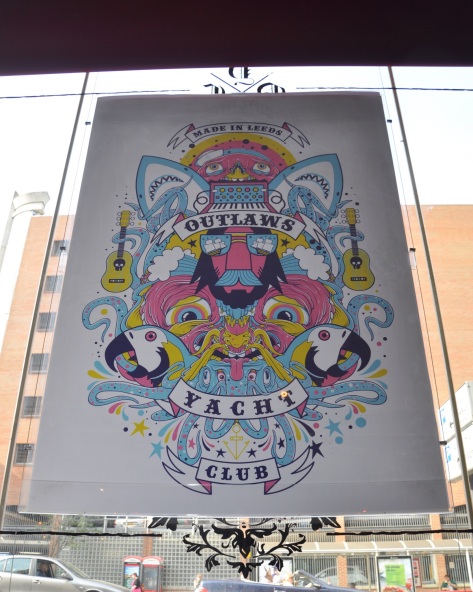 They launched their Meat/Cheese Boards a while ago and I for one love a bit of meat, no pun intended! Every Tuesday they offer a Meat/Cheese Board & bottle of House wine for £15 all day, it sounded like a bargain. Being a huge fan of charcuterie that The Reliance and Friends of Ham serve, I wanted to find out if Outlaws would also hit the mark or not, especially as the former have set such high standards in Leeds.

Armed with an appetite for both meat and wine I turned up with my friend Alice last Tuesday. Going for a Luis Felipe Edwards Cabernet Sauvignon (£13.90) – it was a decent bottle of plonk and not too robust to overpower the charcuterie we’d get on our platter. Served at the right temperature too so quaffable from the get go! 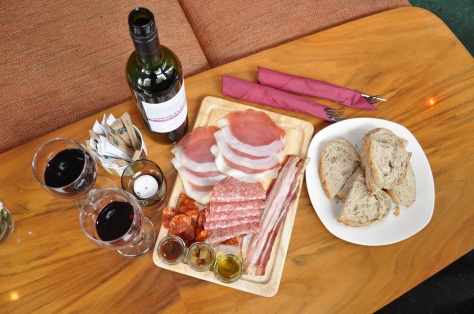 The list of meats to be served on the platter were as follows: Fiocco, Lonzino, Chorizo and Bresaolo, so when our platter was brought over packed with meaty goodness I was relishing the idea of a meaty platter to share. But on first appearance, neither of us were completely sure if the description matched what was in front of us. Salami and Chorizo were definitely present, but there was no evidence of Bresaolo and I’m not sure which was Fiocco or Lonzino! 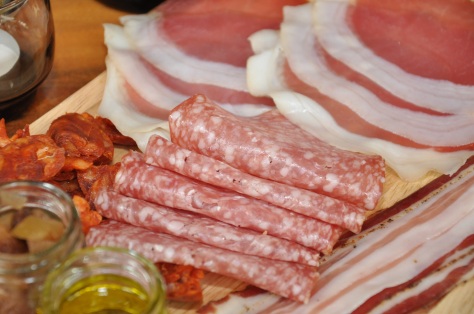 The Sourdough bread was good – it came sliced, warm and very lightly toasted which I didn’t mind, but I think I’d have preferred a warm loaf to slice myself, or it un-toasted altogether.

In terms of the meat, I liked the chorizo but found it underwhelming and could have done with more paprika smokiness and heat. Salami is always a winner, but the other two (whatever they were) were pleasant enough, but I personally prefer charcuterie with more flavour. Lots of fat too, so it may not have been to everyone’s liking. I liked the additional condiments, in particular the chutney but there needed to be much more of it. For two to share there’s not enough and the proportions are a little misjudged I think.  Saying that they did offer us more bread which we took them up on, we also got a little more chutney too.

Food: the platter is quite tasty. Proportions need to better judged and I’d probably prefer to be able to choose my own selection. Also if they serve meats not described on the menu this should be pointed out at the start.

Atmosphere: with a  good atmosphere, it’s a very easy place to relax for a few after-work drinks and some food.

Service: the staff are friendly and immediately make you feel at home.

Overall, for £15 the price is reasonable, especially considering the wine alone is nearly the same price. Even with a few little niggles I’d recommend Outlaws.