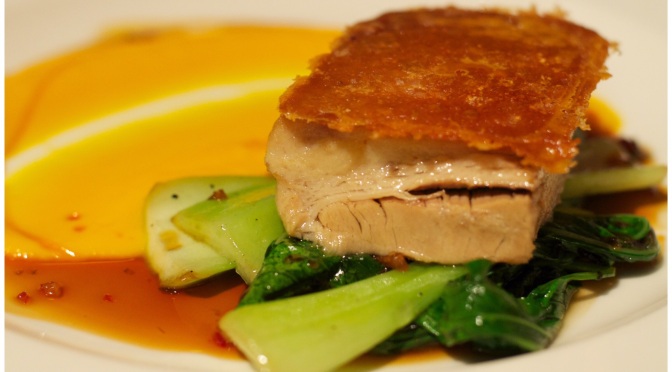 October half term has been and nearly gone, at the start of it last weekend we had the pleasure of meeting our newborn nephew, just 8 days old. As usual we’d built up an appetite and wanted to eat out without driving into Leeds, so luckily for us Healds Hall Hotel and Restaurant was nearby in Liversedge. It’s not the first time I’ve eaten here, as the other half’s family have used the venue for celebratory meals in the past.

They have a bistro and a restaurant area, both differing in appearance and mood, my personal preference is to eat in the bistro as I find it more relaxing and there’s more of an atmosphere. The menu is quite diverse with a daily specials list, often having a lot of choice for meat, fish lovers and also vegetarians. 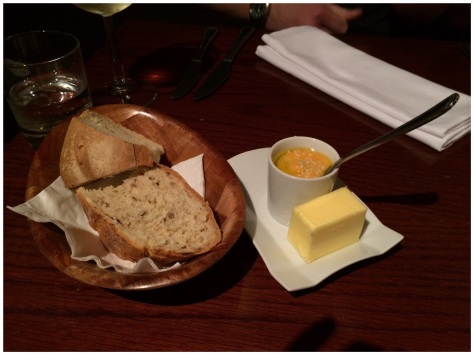 We were brought to start the slow cooked ox cheek and a pork fillet tempura. The cheek (my dish) was the star of the two, no pressure needed with the fork, melt in the mouth meat, a salty crunch from a bacon crumb, metallic wilted spinach, smooth celeriac puree, onion sweetness and a rich sauce that bound it all together. A winner of a dish!! A pork fillet tempura was liked by the other half, but I thought the tempura could’ve been lighter, its flavour was good, but I wasn’t too fussed on the concept of a decent pork fillet, stuffed with ginger, chilli, coriander and spring onion, then deep fried in batter…still not too sure about it now. For me, more style over substance.

Now onto the main course; firstly the scallops worked on a number of levels. The scallops hit the mark on size and were cooked accurately, but with the roe attached it was a little overpowering and these were left on the plate. To go with the scallops was a ‘scotch egg’, more like a round croquette filled with pig cheek and black pudding, crisp on the outside and packed full of rich meatiness. Sat on a bed of pear which worked well with the cider sauce and gave some acidity to the plate.

For some reason I always order pork belly when I come here, with varying success though, last time the crackling was mega hard and far too salty, so maybe I was glutton for punishment ordering it again. Only time would tell. On this occasion the meat was tender, with customary layers of fat running through it, but I’d wished the fat had been rendered down more so it wasn’t so thick between layers of the meat. Saying that the crackling was salty and crisp. I really liked the bok choi, sweet chilli dressing and a hint of ginger in the puree, hinting at an asian influence, but I found the carrot puree a little on the sweet side, even with the ginger.

Finally desserts, there was an amaretto creme brûlée which seem to suit the other half just fine, a nicely caramelised sugary top which had a good snap, a light and creamy custard and crumbly hazelnut cookies. My dessert of apple and blackberry crumble was comforting and yummy, it had an toasted oaty crumble topping hiding lots of fruit that had been gently stewed, so it still had some structure. Accompanied by a cute jug of delicious custard (with lots of vanilla seeds) and jobs a good ‘un. I could eat that pud all day long, literally!!

For drinks we ordered wine, it ended up being three large glasses of white, stupidly we should have ordered a bottle but for some reason didn’t I don’t really know why! Dinner for two with wine was £82.60, without tip, a little more than I was expecting if I’m honest.

Food: menu tries to cover a lot of bases, not sure if that’s always a good thing. On the whole dishes tasted good, but there were areas of improvement.

Service: Staff are pleasant and friendly, waiting time between courses was a little slow at times.

Atmosphere: pleasant place to have dinner.