I’d heard on the grapevine the bottom floor of the Candle House building in Granary Wharf would be converted into a bar/pizzeria a while ago. This part of town has a growing reputation of becoming another part the city centre’s vibrant food and drink scene with the likes of Livin’Italy, Bilbao Bar and Fazenda as neighbours.

A catch up with the girls a couple of weeks ago meant drinks and a spot of lunch was in order – we thought Brewery Wharf would make a change, rather than staying slap bang in the centre, or going to one of our favourite haunts over the years – The Reliance, and anyway it’s always good to try out somewhere new.

The menu is primarily based around pizzas, freshly made and cooked in their wood-fired oven. Head chef Johan, who’s worked wonders at The Hop in York, one of the other venues in Ossett Brewery’s armoury heads up kitchen operations here, and having tried them before I’d expected good things! Those not up for a pizza, they have a small selection of salads and sharing platters, with meat, cheese or if you fancy mixing it up, then both??? Pizzas prices range between £7 and £11, they’ve got classics like Margherita and Meat Feast, to suit the more traditional pizza lovers amongst us, but for the slightly more adventurous a selection of specials such as their pizza titled ‘New Yorker’ with pastrami and apple wood cheese. In terms of comparing on price with other places around town, I’d say somewhere in the middle, not the cheapest but definitely not the most expensive.

Each month they focus on a country of origin for the wine, this month was Italy, so they match a pizza from the specials with wine; a nice idea in theory, but how successful an idea, only time will tell. Also on the drinks front, being part of Ossett Brewery they are clued up on craft beers, but also have one of those fancy wine dispensers to serve it by the glass.

Candle Bar is a bar which serves food, rather than a restaurant so orders are taken at the bar, and as expected a number is handed over to display in return. It started to get a busier while we were there allowing an atmosphere and ambience to build. I really like the setting, the space is left open so you can see right around the bar to the kitchen, and with floor to ceiling windows letting light in, it’s a relaxing spot for lunch. 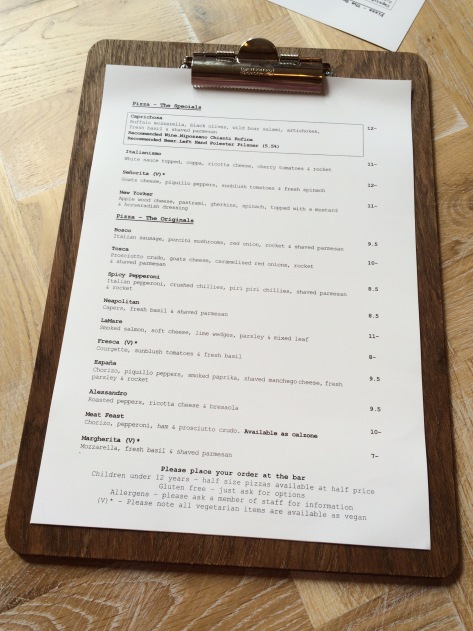 We waited a little while, even though we were pretty hungry we were busy catching up and making quite a bit of noise, adding to the atmosphere, so in a way we were happy to wait. Being the first couple of days of opening, I would expect this to speed up as procedures become more embedded. Three pizzas, a salad and some focaccia were brought to the table, with some waiting time in between things being brought over. Little niggles I’m sure over time will be ironed out.

Good things: the base is thin, topped generously and made with quality ingredients. Lots of compliments in terms of taste were flying around the table, I like how they aren’t ridiculously overloaded with cheese, as far as pizzas go, possibly not as calorific?! I can imagine in the summer months when/if we get some days when it could be perfect for a day spent in their outdoor seating, I could happily graze on pizza and not be too full to leisurely enjoy drinks in the sun. 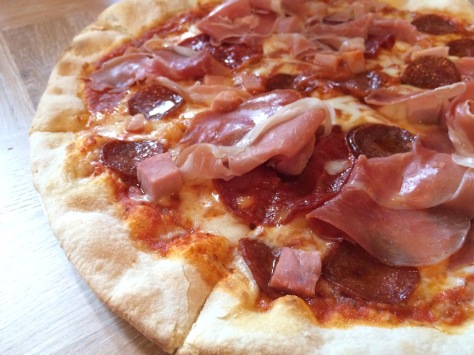 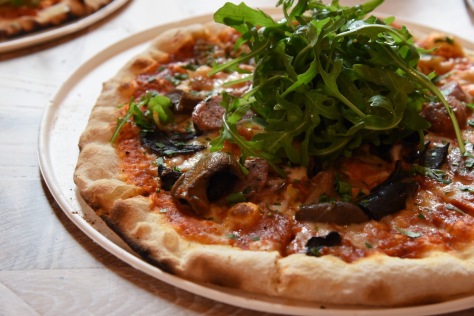 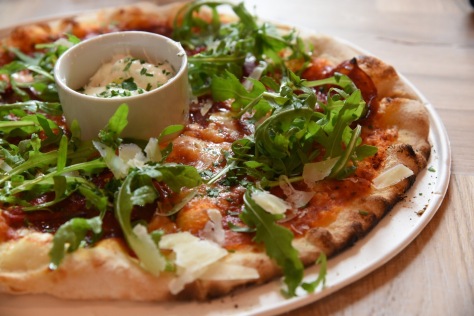 The salad and bread went down particularly well too; the salmon salad was generously portioned and they hadn’t scrimped on the salmon. The bread was a winner with all of us – I loved it! Served warm, it had lots of olive oil and herbs, really yummy. 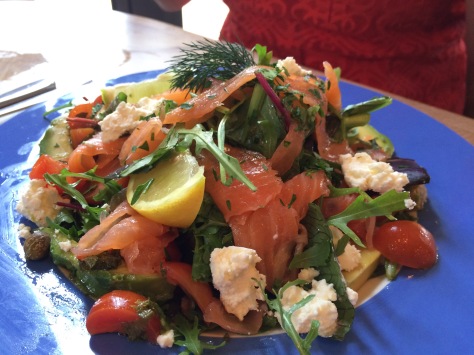 As far as a lunch spot goes, I think it’s a good addition to this part of town.