Last weekend I had a couple of important things to think about, first was the other half’s birthday and second running the City of London Mile at St Paul’s Cathedral. Regular readers may know I like running, really my only means of staying moderately fit and burn off all the food I eat!! I’d never really done an official timed short race before, so this was kinda new and was gonna be a little test of my speed more than stamina. A definite bonus was the event was *free*, yes indeed it didn’t cost me a penny, something that hardly ever happens, excluding the fantastic Park Run that is!! Completely sponsored by Amba Hotels and even better I’d get a medal to show for my efforts!!! Apart from the whole running like a lunatic to try and get fitter, being handed the bling when crossing the finishing line is brilliant. Lots of my running friends love building their collection of race t-shirts, however I’m all about the medals – I love ’em!!!

Now 99 times out of a 100 I don’t eat before a race, probably a cardinal sin, but I don’t want to get any form of indigestion, that would be my worst running nightmare! With the mile negotiated, my time was 6.56 minutes if you’re bothered about those kinds of things, my quickest ever. It’s not often I’m openly happy about the times I run, I’m never going to be an Olympic athlete or even a county runner, but for me it’s alright!

Hopping on the tube with medal in tow I just wanted to eat, it was 12pm so perfect for a feed! Walking passed Dishoom in Covent Garden, there was the predictable queue which we weren’t interested in so carried on until I picked out Kopapa ahead of me; a brunch spot that kept popping up in my research. Located in the Seven Dials area of Covent Garden, I knew it’d be busy as I’d failed to book a table the day before, but as we were outside there’d be no harm in asking. Yes, as expected there were no free tables, but we were offered the bar instead – I love eating at the bar, it’s where you can chat to the staff and watch them trying to look cool making coffee and cocktails. 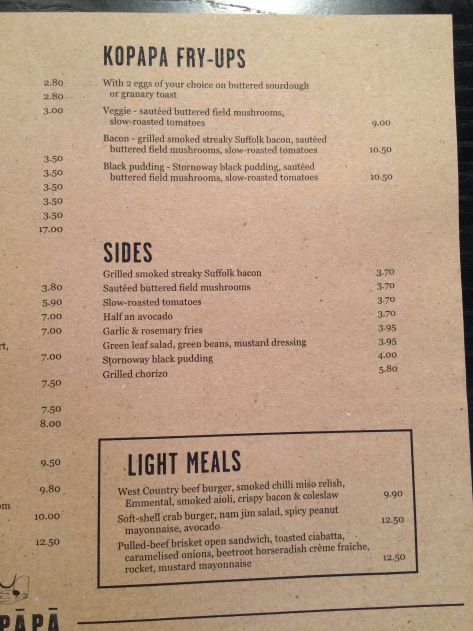 I’d read much about their Turkish egg dish, but what caught my eye was the chorizo hash, while it wasn’t much of a surprise the other half eyed up the burger, it was either that or a fry-up. The place had a busy atmosphere, with plenty of chat and the staff seemed to be keeping themselves very busy. Quickly a couple of Bloody Mary’s were ordered from the friendly bar man, probably a little hastily on my part as if I’d have looked a little more closely I would’ve ordered something a little less fiery, but hey ho.

I’m a huge brunch fan, it ticks a tonne of boxes as far as I’m concerned, where you can have a leisurely drink whilst eating a lot of food fairly early on in the day is a brilliant thing! Our food arrived in good time and I found my chorizo hash with fried eggs and rocket filling and packed a punch with flavour, the sriracha really making the extra difference with a smack of heat!! Runny egg yolks too, what more could I ask for when it comes to a comforting brunch that would set me up for the rest of the day! It’s even something I would try and replicate at home. The burger was polished off in no time at all, not because it was small or anything, but because it tasted great – a perfectly cooked patty left pink and juicy, crisp salty bacon, salad that hadn’t been left to wilt, fantastic fries and a decent coleslaw which had a little sharpness. I think it’s fair to say we were both  very happy! 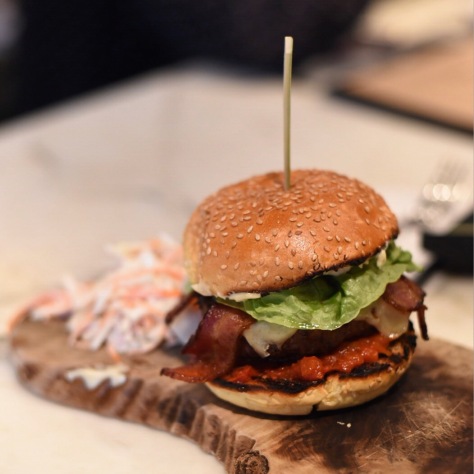 Kopapa’s definitely a brunch spot to remember for future visits!