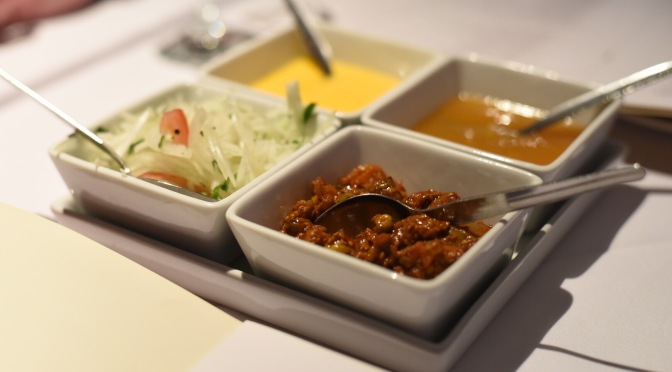 This is from a few weekends ago, so sorry for the slow write up! I’d stayed south for a bit with a couple of races in the diary, the second of which was the Nike Women’s 10K. It’d been a great morning running alongside other women, from serious athletes to complete novices, it felt very empowering even when I was being passed on the outside! The sun was out and it turned out to be a scorcher of a morning where I left London after bagging a new PB, a glass of champagne to celebrate and another bit of bling. Once I’d got back to Woking I fancied a Sunday evening curry as you do, a little surprising as when it gets warm I tend to stay away from hot and spicy food.

We’d tried Thali Thali recently which was good, but wanted to see what else Woking had to offer so searched the web for ideas. One of the main streets in Woking’s town centre is Chertsey Road, it’s lined with a mixture of well known establishments like Nando’s and the like, but just down the road are Thali Thali and a few others including Jaipur and Bombay Night, both with similar menus the latter possibly a little less expensive.

We arrived at Bombay Night first so went for it, getting there early doors the place was empty, however hardly surprising at 6pm. Staff seemed friendly and drinks were quickly ordered, but for whatever reason they brought over a glass of Cabernet Sauvignon instead of Sauvignon Blanc for my husband; he’s allergic to red so we definitely didn’t order it. Thankfully it was quickly remedied, but after a number of minutes of waiting.

It’s standard to start off with popadoms and pickle tray, so who were we to argue and for once there was a lime pickle that I actually liked. Usually I can’t handle the spicy sourness probably because I’m a bit of a wuss, but this was much gentler. Not to say we both liked it though as my husband tried it just the once.

The starters tasted good, in particular the mixed kebab with really flavourful, tender meat and a kick of heat. They were possibly a tad smaller than we’re used to, but I suppose the saying quality over quantity and all that’s there for good reason. One niggle with my dish were the prawns, it was going well until I saw a few with those awful veins which need removing. Such a shame.

Even though our main courses were completely different dishes, apart from one being prawn and one chicken they both looked very similar. Both dishes known for not being particularly spicy were The bhuna tasted good, there was loads of prawns, but again there were a few with those horrible veins running through them, it’s an annoyance removing the horrible offenders and then getting on with eating it. The other half’s garlic chicken was as it’s name suggested with plenty of soft chicken and garlic, so all good there.

I enjoyed my curry overall, the sauce wasn’t ridiculously orange like some I’ve seen. The prawns, even though well cooked, it’s really annoying when a number of them are not clean and have that horrible black vein running along them. If I’d found them early on I’d have said something, but I’d already eaten a portion of it. But then it got me thinking if I’d already eaten some of the bad ones…the thought turns me a bit sick.

The garlic naan wasn’t the largest I’ve ever had, but it was garlicky and great for mopping up the curry!

I think from the two we’ve tried so far, I’d definitely go back to Thali Thali over Bombay Night.