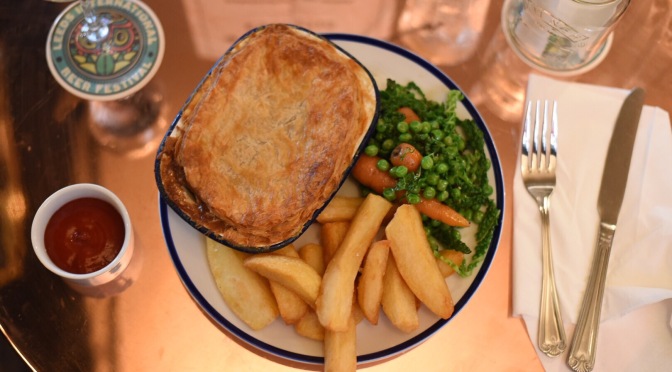 When you think of the pubs in Leeds, Whitelock’s is synonymous with the very best. The oldest public house in the city celebrated a 300th birthday this year, but certainly hasn’t rested on its laurels since being taken over by a new owner in 2012. This much-loved establishment has always been renowned for its history and a passion for championing real ales from local breweries, all served by very knowledge staff. However, Whitelock’s isn’t all about quality beverages, they’ve given plenty of attention to a food menu that suits the pub with classic, hearty dishes made using ingredients from local producers, in particular Kirkstall Market.

With a new chef at the helm, there are starter and light bite plates like the Heirloom beetroot and Yorkshire fine fettle salad or the stunner of a chorizo dish, accompanied with peas and mint sitting on top of a crumpet. Large chunks of chorizo from award winning Lishman’s of Ilkley had a beautiful smokiness without being too intense, peas (and their pods) brought sweetness and a lovely soft crumpet all made for a real scrumptious starter.

As far as main courses go there are classics such as beer battered fish and chips, Lishman’s sausage and mash and the homemade beef and ale pie with chips and veg which was my choice, also a few regularly changing specials. Even though the pie wasn’t fully encased in pastry, all was forgiven as it was a comforting and delicious crowdpleaser. The pastry lid itself was perfect – golden, crisp and flaky, and not let down by the filling underneath of tender beef and rich gravy, laced with ale. Along with good chunky chips and seasonal veg it was a wholesome plate of damn tasty food!

Whitelock’s is definitely serving food to match the quality of its drinks, this can only be an amazing thing and simply reinforces that yes, it may be in its 300th year, however the place is still pushing itself and striving to be even better than it already is!!!