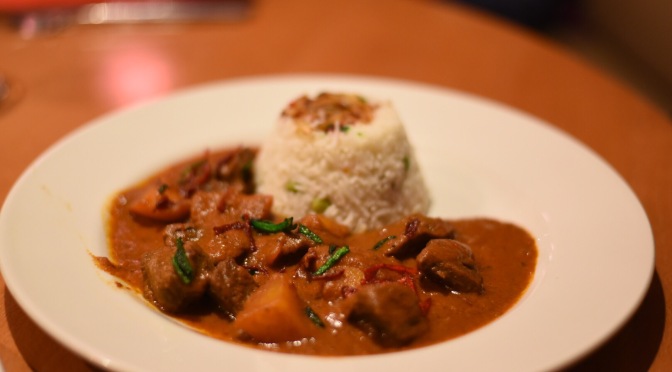 Blogging’s taken a bit of a back seat recently, since my move down south life’s gotten in the way and posts have been few and far between; my last post being sometime in October. Even though there’s been the intention of writing, I’ve not really been in the right head space, so with a mini back log stacking up and with Christmas and New Year’s celebrations over with for another year, it’s time to do some catching up.

Woking town centre’s littered with chain restaurants, but there are independent spots around including a few curry houses. My continual search for the great and good of the independent food scene has brought my attention to a couple – namely Thali Thali and Bombay Night with differing levels of success, I’d heard promising things about some others, so on successive Friday evenings we found ourselves at Jaipur and Ray’s Indian.

Starting off with Jaipur – located on Woking’s Chertsey Road nestled amongst a hotch potch of businesses, where you’ll find deep fried chicken, tex mex, cheap pints, a few local indies, the bookies and the gym amongst other things.

After a disappointing curry at Bombay Night, Jaipur was a completely different affair and somewhere that we’d go again. With plush interiors and dim lighting, the food and service was excellent. Dishes came with prawns, chicken and lamb cooked till moist and juicy, sauces were thick without becoming cloying, subtle in taste as spices were used in moderation and overall had an air of refinement. Sundries of garlic naan and mushroom rice were also up to the task.

For all the plus points, I’m still going to grumble about portion sizes and value for money, however I can’t winge about the food itself as it was all well done.

Our second curry was at Rays Indian, a stones throw from the town centre and somewhere we’d walked passed a number of times as it’s on the way to the train station. A few months ago award winning Rays Indian came to our attention as part of Woking’s Food and Drink Festival, and the gannets that we are got our hands on some curry; it immediately joined our list of places to try.  Opening in 2013, their aim was to bring traditional Indian street food to the local area in a restaurant setting – an idea that’s been seen more this year than any other.

The place ticked a lot of boxes – relaxed, friendly and personable service combined with great tasting food. I could’ve done with double sized portions once again, however it was well flavoured and cooked on point. My adventurous side coming out again with an order of Keralan king prawn, and rewarded me with a delicious dish, juicy sweet prawns, the green beans still had bite and a sauce which could’ve been too sweet from coconut but was counteracted with the lime and ginger. Similar to Jaipur, I found the food more refined than some of our previous experiences in the town,

Great news to hear that Rays Indian is opening a permanent street food stall in the town centre’s Market Walk, it may even be open now.

Both Jaipur and Ray’s Indian I’d recommend for a tasty refined curry!

2 thoughts on “A Tale of Two Curries, Woking”