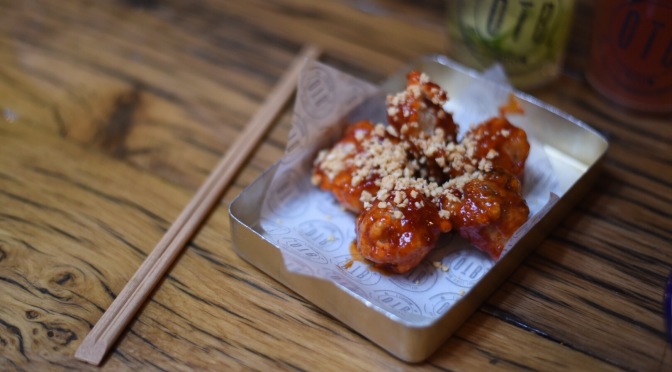 On The Bab, Korean street food purveyors are found in Covent Garden Opera Tavern. Their food I’d seen on Instagram and basically just wanted to get my hands on their fried chicken, take a look for yourselves and you’ll see what I mean. Our lunch stint at the Opera Tavern had filled me satisfactorily, but when seeing this place on the way out I couldn’t help going in, I’m hoping you’ll forgive the lack of willpower?!

On entering, tables fill a fairly narrow space and work their way around the counter where all the action in the kitchen and bar happens. With just a few spare bar seats unoccupied, we took up the remaining counter spots after a little struggle to get there. The place is a little short on space and diners may find themselves squeezed within close proximity of neighbouring diners on three out of four sides. However, that brings along with it a lively atmosphere.

For such a busy time of day, they seemed a tad short staffed out front and the waiter seemed completely rushed off his feet, bezzing around as best as he could. Now who was I kidding when I said I only wanted to try the fried chicken, if only I had the willpower to resist ordering more. Even though I’d only just finished lunch!! Their buns on the menu sounded great, so my resistance wained without much effort and alongside the fried chicken were a couple of buns, one filled with spicy pork, the other with crispy chicken.

The best bit – the fried chicken which were crispy, coated in a sauce that did as advertised (sweet and spicy) and topped with crushed peanuts to add texture. The chicken itself was like popcorn chicken, wolfed down within a minute and could’ve done with being chunkier pieces resulting in juicier meat. The buns could’ve been hotter, one wasn’t very hot at all, verging on the side of just warm. The better of the two fillings was the pork – sweet, spicy, sticky and sloppy. Whilst the crispy chicken was a tad anaemic and could’ve done with a bit longer in the fryer to crispen it up more. The other half’s spicy pork on rice didn’t do his gluten intolerance any favours, but was a tasty filling bowl.

On reflection I’d say On the Bab does decent grub overall – it’s definitely not perfect, but turns out tasty food and is reasonably priced for the location. Don’t be going there for a leisurely long lunch or intimate dinner, it’s not kind of place at all I think, to me it’s more of a quick pit stop. They need to brush up on their service, more people out front would help no end.