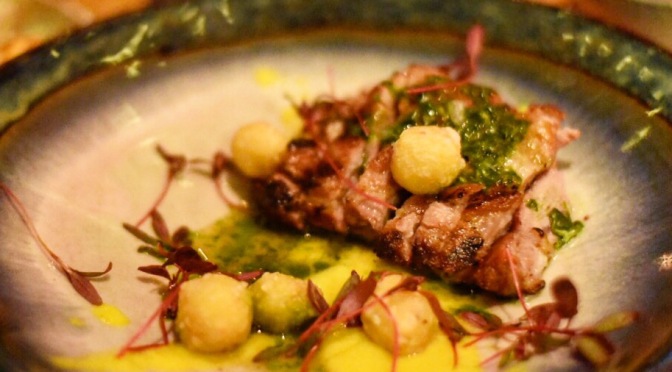 Peruvian food has definitely become ‘a thing’ in recent years, especially in London. Establishments such as Ceviche, Lima and Andina opening their doors to the public and  winning the hearts of many with their fusion food and Pisco sours. Some of which have garnered high praise and acclaim, in particular Lima being awarded a Michelin star.

A table booked at Pachamama for 6pm sounded reasonable, right? In hindsight we probably shouldn’t have booked a table for 6pm, but had completely misjudged ourselves with how much we’d eat beforehand! You’ll see from my two posts on Opera Tavern and On the Bab!

Off the main drag, you’ll see a big ‘A’ in neon, I was a little confused at first, perhaps it relates to Andean cuisine? The front door immediately leads to a staircase taking customers below street level, resulting in a dark atmosphere to the room lit up with neon and the odd lamp/candle. The menu’s broken down into snack, sea, land, soil and desserts and lend themselves to sharing, you guessed it – small plates! We obliged by ordering something from each, apart from desserts – not wanting to risk bursting as we’d probably be full to the brim after all the eating we’d already done.

The dishes were beautifully executed, amalgamating good presentation with interesting ingredients and tastes. There wasn’t much to fault, apart from ourselves for possibly spooling our appetites before we’d even got to the restaurant, but that’s completely our (ahem my) greedy mistake. Highlights were many – the lamb belly, Iberico pork, fried chicken and chicharonnes! All on the money, some of the best fried chicken I’ve eaten and kicks the one from On The Bab into submission (hey, I know it’s not the same but whatever!). The lamb, you may know I’m not the greatest lover of lamb, but I could’ve been converted after that dish – well cooked, so tender and moist, with flavours which just sung. If I enjoyed the lamb, I loved the Iberico pork which was super succulent, the maize puffs reminded me of corn maize puff snacks which I love, and a huacatay sauce that provided its own unique herbiness to the plate.

Both food and cocktails being equally awesome, the staff are welcoming and its popularity didn’t seem to affect the speed of service. This aside, it’s certainly not cheap and despite how much we enjoyed it, Pachamama is definitely a place for a special treat, rather than somewhere you fancy going just because you can’t be bothered to cook tea!