If you’ve read my most recent post on Soya, you’ll know that apart from eating, a bit of the weekend was spent running as some friends and I had entered the Bath half marathon. Our accommodation for the weekend was a house we’d booked through AirBnB, about 10 -15 minutes walk north of the city. After the usual settling in period at the house, we walked into the centre and took in our surroundings, out of our party of five, three of us had never visited the city so it was nice to explore a little. Four of us were running and we’d all eaten an early breakfast, so by midday we were pretty ravenous, and as always carbs were the first thought on our minds.

Everyone had assumed I had a list of places already researched to go, but on a rare occasion I didn’t, it was actually refreshing not to have done any work for it!! We weren’t after a posh restaurant or anything like that, but somewhere informal just to fill our stomachs and rest our legs before the big day. So after a quick internet search the place Yammo! popped up, an Italian diner which advertised itself as a Neapolitan street food kitchen and pizzeria – we thought it ticked all the boxes. 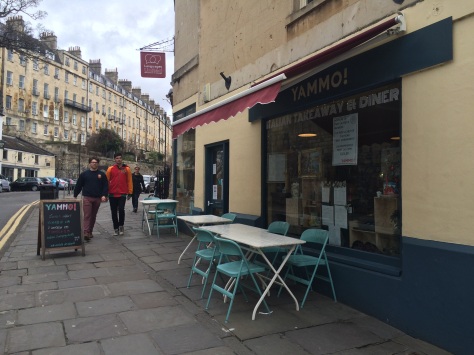 Located on Walcot St very close to Pulteney Bridge, the place looked quite small and with all the tables occupied it seemed we’d be out of luck, but it was our lucky day as there were a couple of free tables upstairs. Initially unbeknownst to us the place had won awards the last couple of years; including best newcomer 2013, (Bath Good Food Awards), UK Best pizza chef 2014 for its Margherita pizza, (PAPA Industry Awards) and just a few days ago were named Best Restaurant at Bath Life Awards 2015.

Apart from pizza the menu has lots going for it, using as many local ingredients as possible they offer a choice of dishes including small plates, antipasti and burgers. So it was no surprise that we  ordered a broad selection of items, including a couple of pizzas (Margherita and a Diavola), one burger with extra salami, whilst myself and a friend wanted to share four small plates. 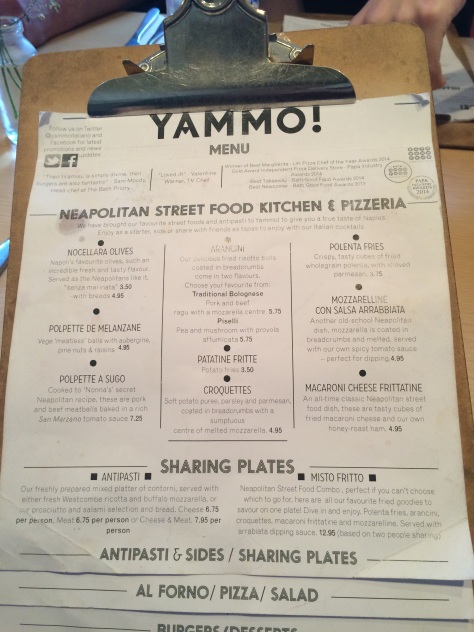 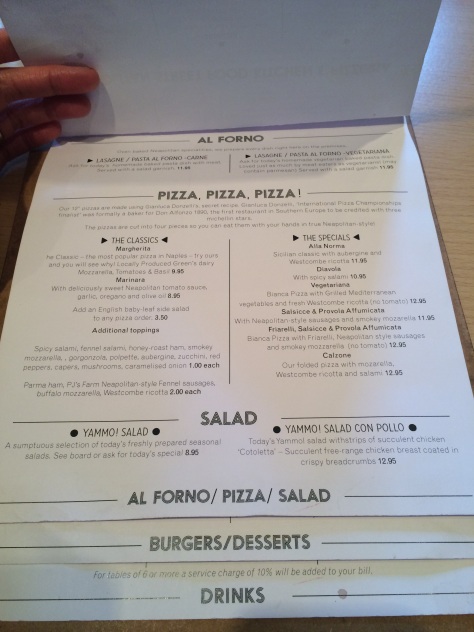 Here are the pizzas (£9.95 and £10.95); I can’t comment on the pizzas myself, but as far as my friends there was praise aplenty for both. They weren’t the uber thinnest of bases, but it didn’t matter as the base was a tasty one with a bit of chew,  their toppings were kept simple and to good effect too.

A side of crispy polenta (£3.75) were very moreish, again treated simply with some grated parmesan and a few salad leaves they were delicious.

The burger (£13.95) belonged to the other half and he was pretty quiet on the other side of the table, meaning that he was happy and it was spot on I reckon!

The four remaining dishes all came out at the same time, yes there was a lot of fried stuff, but most involved lots of carbs and it was exactly what we were after! All of them were excellent, the bolognese arancini (£5.75) were massive, perfectly golden, with a tasty ragu and risotto rice that was unctuously sticky and a stretchy mozzarella cheese centre. They were so so good!! Next up the potato croquettes (£4.95), again size here wasn’t an issue, there was lots of parsley, parmesan cheese, and when cutting into them soft, stretchy mozzarella cheese was on show. Third up the polpette a sugo (£7.25), on the menu it said they were based on ‘Nonna’s secret Neapolitan recipe, so surely they had to be good! Made with a mix of beef and pork these were perfect, soft in texture without falling apart, covered in a wonderful tomato sauce using San Marzano tomatoes. Last but by no means least the macaroni cheese frittatine (£4.95), now I’d never had it like this before, basically cubes of macaroni cheese with honey roasted ham running through it were deep-fried, so they had a golden cheese crust. Out of all of the these may have been my favourites out of four very good plates!!

If you’re in Bath at any point, you may be a local or just visiting like I was, then Yammo! is definitely worth a try! You’ll get some cracking food, decent service in informal surroundings at a reasonable price.

Do you have any recommendations for Bath? I’d love to know which eateries are your favourites!

Nominations for the 7th Oliver Awards were released for 2015 a little while ago. Even though the opinion of one restaurant being better than the other is completely subjective and whether you like awards ceremonies, thats a whole other conversation.

Personally, I have a love/hate relationship with them. I’m not one for being an extrovert and am happier in the shadows! As a high school student in a South Wales Comprehensive competing in the school annual Eisteddfod (cultural festival) for the prize of best pianist, it was equally terrifying as it was exhilarating and going up to collect the winners award was even worse!! I was far more at ease playing some Brahms or Mendelssohn behind closed doors rather than facing my peers.

So who’s made it to the shortlist of the regions best? It may give you some new ideas of where to try next or revisit. With so many strong competitors vying to be crowned winners of their own hotly contested categories, there are a few favourites of mine which I’ve highlighted, but also some which are on my go-to list tool!

The awards will be announced at 9th March 2015, who are your favourites?

A London Based Food Blog & Travel Blog - Always Cooking, Eating & on the Move